At 6:00 AM this morning Sirens sounded in Moscow. One hour later the Minister of Defense announced:

“Today, another unannounced inspection began in accordance with a decision by the Supreme Commander of the Armed Forces of the Russian Federation.

1st) Several Key Terrorists supported by US Dollars were found, and killed, yesterday in the south Western State of Chechnya and they spoke of an “Invasion.” - but that is Top Secret.

2nd) It was 86* (F) in the South Eastern Russian State yesterday when huge Egg Sized Hail Stones the size of Chicken Eggs pummeled much of the states of Dagestan and Chechnya destroying much of the infrastructure and it was, of course, caused by a US Satellite. Again - Top Secret.

3rd) Vice President Joe Biden has ordered the retreat of ISIS to the East of the Euphrates and Turkey and Russia have had enough ad are destroying these CIA fighters.

Since when did the Vice President of the United States begin controlling military forces?

4th) It appears that half of the US is under some sort of State of Emergency due to fires and floods.


WHAT'S BEHIND THIS WAR?

b) A war was ordered 22 August and nobody came - the invasion of Russia by NATO was cancelled. There is a power on this planet now that blocked those orders

c) President Obama has been given until 14 September to shut down the entire US Economy - and no one is listening. Yes - the Ports are empty and Spare Parts are few and far between - but that is a long way from shutting the entire economy down.

As a child I remember a news story in the Oakland Tribune in the 70s stating Israel has just drilled the deepest oil well in the world.

Well - apparently Syrian, Iran, Norway, and Israel (Leviathan Oil Deposits) are all vying for the sale of Oil and Natural Gas to the hungry 750 million Europeans.


IT IS MORE THAN MONEY THOUGH THAT DRIVES THESE WARS


These Lucifarians who run the world - these Fallen Angels - wish only the destruction of the human Race and until GOD assists us in getting rid of these Ratfinks we are stuck with this Permanent State of War that has existed since we all can remember.

So we pray that these Fallen Angels (Agellions, GOD’s Children) either leave or turn back to GOD

We pray that our families are ready for what is coming.

To the smartest, most awake audience in the world - thank you for participating.

HAIL IN SOUTH WESTERN RUSSIA - STATES OF DAGSTAN AND CHECHNY: 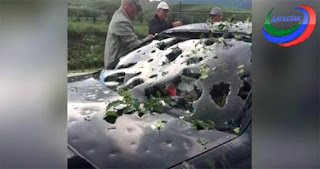 Dagestan has suffered from the huge hail | Earth Chronicles News

TERRORISTS CAPTURED: AND THEY TALK ABOUT THE COMING US INVASION - BUT THAT PART IS TOP SECRET

MOST COUNTIES IN US ALREADY UNDER STATES OF EMERGENCY - JUST LOOK AT THESE 3 STATES:

A STATE OF EMERGENCY DECLARATION:


PROCLAMATION OF A STATE OF EMERGENCY


WHEREAS on July 22, 2016, the Soberanes Fire started in Monterey County, has rapidly burned tens of thousands of acres of land, and continues to burn; and

WHEREAS this fire has threatened hundreds of homes and continues to threaten thousands of structures, including additional homes, necessitating the evacuation of thousands of residents; and

WHEREAS the Soberanes Fire has caused power outages, road closures, and air quality issues in the area surrounding the fire and throughout the County; and

WHEREAS on January 17, 2014, Governor Edmund G. Brown Jr. declared a State of Emergency based on the extreme drought that has caused millions of trees to die, and increased the severity and spread of fires throughout the state; and

WHEREAS the circumstances of this fire by reason of its magnitude, are or are likely to be beyond the control of the services, personnel, equipment, and facilities of any single local government and require the combined forces of a mutual aid region or regions to combat; and

WHEREAS under the provisions of section 8558(b) of the California Government Code, I find that conditions of extreme peril to the safety of persons and property exist in California due to this fire; and

WHEREAS under the provisions of section 8571 of the California Government Code, I find that strict compliance with various statutes and regulations specified in this order would prevent, hinder, or delay the mitigation of the effects of this fire.

NOW, THEREFORE, I, TOM TORLAKSON, Acting Governor of the State of California, in accordance with the authority vested in me by the State Constitution and statutes, including the California Emergency Services Act, and in particular, section 8625 of the California Government Code, HEREBY PROCLAIM A STATE OF EMERGENCY to exist in Monterey County.

IT IS HEREBY ORDERED THAT:

1. All agencies of the state government shall utilize and employ state personnel, equipment, and facilities for the performance of any and all activities consistent with the direction of the Governor's Office of Emergency Services and the State Emergency Plan. Also, all citizens are to heed the advice of emergency officials with regard to this emergency in order to protect their safety.

2. Health and Safety Code sections 103525.5 and 103625, and Penal Code section 14251, requiring the imposition of fees, are hereby suspended with regard to any request for copies of certificates of birth, death, marriage, and dissolution of marriage records, by any individual who lost such records as a result of the fire. Such copies shall be provided without charge.

3. Vehicle Code sections 9265(a), 9867, 14901, 14902 and 15255.2, requiring the imposition of fees, are suspended with regard to any request for replacement of a driver's license, identification card, vehicle registration certificate, or certificate of title, by any individual who lost such records as a result of the wildfire. Such records shall be replaced without charge.

4. The provisions of Vehicle Code sections 4602 and 5902, requiring the timely registration or transfer of title, are suspended with regard to any registration or transfer of title by any residents of Monterey County who are unable to comply with those requirements as a result of the fire. The time covered by this suspension shall not be included in calculating any late penalty pursuant to Vehicle Code section 9554.

6. The Office of Emergency Services shall determine if local government assistance for Monterey County is appropriate under the authority of the California Disaster Assistance Act, California Government Code section 8680 et seq. and California Code of Regulations, title 19, section 2900 et seq.

I FURTHER DIRECT that as soon as hereafter possible, this proclamation be filed in the Office of the Secretary of State and that widespread publicity and notice be given of this proclamation.

IN WITNESS WHEREOF I have hereunto set my hand and caused the Great Seal of the State of California to be affixed this 26th day of July 2016.