Israel has launched another unprovoked attack on Syria - this time at the Mezze Airport in Damascus.

Some reports claim that the attacks were made from Land Based Missiles, but  Syrian Radar clearly shows Israeli Jets firing the missiles.

Regardless of how the attacks were made, the Ammo Depots did explode and the attacks did come from within side of Israel after the F-35 Fighters were scrambled.

After the Trumpster does take office the Oil Pipeline form North Dakota will be completed and the US will then outsell Arab Oil at $9 a barrel - thus eliminating the need to sell Arabs weapons for oil.

We will see how effective Uncle Harry's Liquid Remineralization For Tooth Enamal is today at the Dentist - We are excited because of hte last visit. 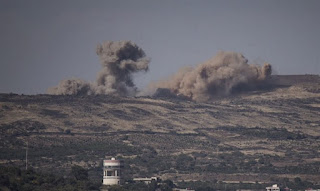