The Department of Homeland Security warns of possible attacks to Churches across America.

A Bulletin was issued by the Private French Owned Corporation Homeland Security and the FBI to Private Security Companies across the US.

The Bulletin stated there were no known specific, credible threats but issued caution.

In another closely related story the French Owned Corporation FBI stated that they are aware of the recent link published on line that urges attacks on US Churches and actually lists the Churches they intent to attack.

The home addresses of those publishing this list of Churches to attack is known and the FBI and Homeland Security refuse to make any arrests based on these threats.

Both  Corporations, owned by the IMF - who’s leader is the cross dresser Christine (Chris)  Lagarde has apparently ordered them to not arrest terrorists and lean on local law enforcement agencies to allow the attacks.

By the way - Christine Lagarde was recently been found guilty of stealing $430 Million Dollars (to defend a friend named Bernard Tapie) from the IMF but will not have to pay the money back, will not be fine, and will not go to jail.

So her ordering her Corporations like the FBI and Homeland Security to allow terrorists attacks in the US is right up her alley.

In the mean time the Main Stream Media continues their lies

In further news: The NATO Auditor General was found dead a few days ago - shot to death.

We warned these Leaders - do as GOD has directed or face the consequences - now their blood is on their own heads. They will be killed or replaced by a double. Expect the murders and exchanges to accelerate. Your current handlers want you dead. Now it is happening.

Finally - remember way back we stated Montenegro would be a New US Killing Zone?

In November NATO began War Drills in the mountains on this tiny European Nations that was started when Then President Bill Clinton began openly murdering the people in Yugoslavia to try and cover us the Monica Lewinski Story and the hundreds of women he and Hillary have raped?.

Now Congress - knowing this is the New US Killing Zone - has rejected Montenegro’s Entrance into NATO and this leaves them free to arm their nation using French, German and Russian arms - that is to arm their arm of 1,000 soldiers.

Pray with me that every evil deed of these Satanic NAZIs fall flat on their faces.

Please pray that your family is ready for anything these Pigs throw at us - and that maybe considerable.

STAY HOME AND HAVE A MERRY CHRISTMAS


A note to Russia: There is an old Orthodox Church near a river near, a bridge, and a Destroyer in St. Petersburg which may be a target for a small bomb tomorrow in the wee hours of the night just to wake your nation up. Look no further than a US NGO in this city for the perpetrator there will be mud on his shoes in the morning. If I were there I would help protect the church personally.


·         A New York City college student of the Muslim faith cult who filed a hate crime hoax claiming that subway riders did not come to her aid when Trump supporters harassed her—but who then admitted that she made up this lie so she wouldn’t get in trouble for violating curfew.

·         A  college student who claimed that a Trump supporter wrote her a homophobic e-mail—but who was expelled when her lies were exposed.

·         A  college student who reported to police that she’d been robbed by Trump supporters—but who was then arrested after she was discovered to have made this whole story up.

·         A Pennsylvania college student who reported that Trump supporters beat her up—but then refused to cooperate with the police who were exposing her lies.

·         Lies spread by  college students claiming that two Trump supporters were spitting on them, but were found to be untrue when the police investigated.

·         A  college student of the Muslim faith cult who claimed a Trump supporter threatened to remove her hijab and set her on fire was found to be lying by both the police and FBI.

·         A Mississippi African-American church that was burnt down and had written on it “Vote Trump” was discovered to have been done by a black member of that church. 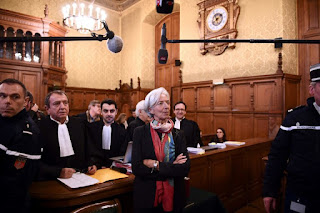